There was a simple specification in my application that needs to have a Review feature. I started off with Google, but the irony here is the keyword "ratings" or "review" accompanied with Windows Phone 7 did not return results that I've been looking for. Instead it was returning the features and real reviews written for Windows Phone 7. The catch here was to convert my keyword to star rating control. I found some decent resources which are implementable, let me summarize them.

1) Silverlight Star Rating Control - This had most of the meat I was looking for. It was actually designed for silverlight and not really tested in Mobile or I can put it like I was not able to find snippets for Mobile implementation. However, it worked alright. The problem was that this package was not having a mechanism to NOT have the Half-Star Mechanism. Going through the source code confirmed that and I do not want to build a new dll out of it and include it in my project. So gave this up. But I would highly recommend this for web client. 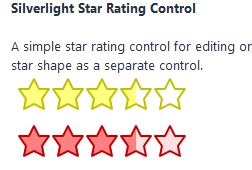 2) The next one I stumbled upon was from a guy Jani Nevalainen. He has blogged it in his website and it had what I needed. But since it was not on a codeplex site/github, and due to its lack of documentation or support I had to push it down the priority list. I have not tried this, but my gut says it will surely work. 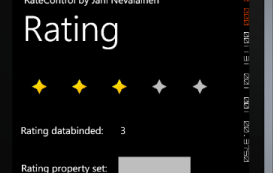 3) Another one which really looked promising was from a blogger named Matthieu. I thought it had everything and even the source on Github and the demo project worked flawlessly. I was expecting for a library file so that I could include it in my project and breathe easily. Unfortunately, that was not something already available. Yes, I can go through the code and compile a source out of it. But I was really lazy to do so. Hence dropped it. But I have to say this was a really good and careful implementation. Kudos to the Author. 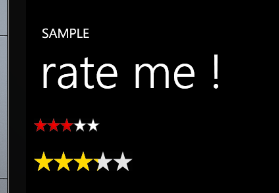 4) And the winner was Coding4Fun! The most sexy and the most famous library for the Windows phone 7.5. It has everything and the forums are really great! Every week you can see builds coming and they are very much responsive to the features that you are suggesting. I could not say that this is the Open source folks' answer to Telerik, but this library is really good. I used their super slider to design my review page. I know it is not like the star mechanism, but still this did the job and it did really great for me! 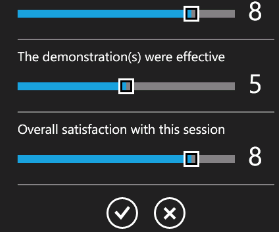