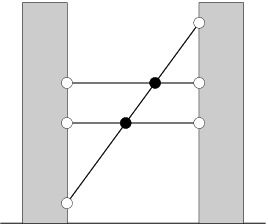 The first line of the input gives the number of test cases, T. T test cases follow. Each case begins with a line containing an integer N, denoting the number of wires you see.
The next N lines each describe one wire with two integers Ai and Bi. These describe the windows that this wire connects: Ai is the height of the window on the left building, and Biis the height of the window on the right building.

For each test case, output one line containing "Case #x: y", where x is the case number (starting from 1) and y is the number of intersection points you see.

Solution
This is one of the simpler problems that I was able to solve in the Codejam round. Following is the source code.